Someone recently requested Hovhaness's Saint Vartan Symphony which is one of his finest and most interesting symphonies. I was most certain that I already shared it here. Well, I was wrong. The only solution is to finally post it. Because that's just how smart I am. The symphony has two parts and is actually made up of 24 short movements. I have a feeling that "Saint Vartan" is the only symphony that has a movement that is for  piano and trombone only (Mvt. no. 14). The majority of the 24 short movements call for strings, horn, trumpet and various percussion. Solemn ceremonial arias are contrasted with lively, canonic dances and simply put the ride is exciting, the journey is entirely fresh and brimming with non-stop invention. "Artik" (named after a 7th century octagonal Armenian church) is a Concerto for Horn and String Orchestra that is solemn and extremely beautiful. This recording is (another) absolute treasure from Crystal Records.

The fine booklet contains notes on "Artik" written by Hovhaness and I will type it and the rest out tomorrow, it is getting late here.

This is perhaps the most unflattering cover. A bad photo is only made worse when it appears to have been cut out with scissors and pasted by a 5 year old. And who would dare forsake the special effects in favor of the green screen? Ah well. 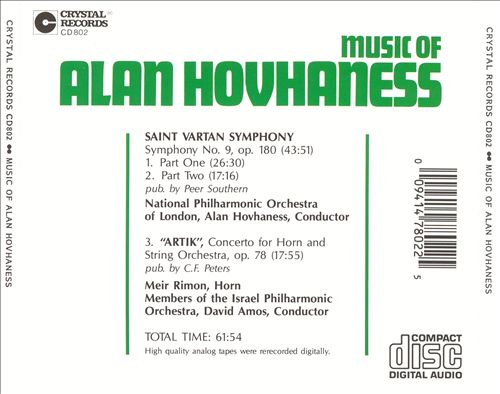 After a couple of decades this is still my favorite Vaughan Williams recording - excluding the many great recordings of the symphonies. Such a statement might seem a tall order, after all there's a wealth of great recordings that exist of every piece here, except for the major "Flos Campi" ("Flower of the Fields"), one of RVW's masterpieces from the 1920's which is "slim pickings" compared to the rest of the program. I have several favorites including a few on Chandos, one on Hyperion, a couple from EMI and so on. This is a sublime and one-of-a-kind work (yes, there are other pieces that also employ a wordless choir to great effect - the most obvious being the third movement, "Sirens" from Debussy's masterpiece Trois Nocturnes..) that inhabits an oddball universe that is magical, murky, and utterly enchanting.

It is the Tallis Fantasia, for me, that doesn't get any better than this. And oh do I have many many recordings of it that I cherish. Yet the playing here by the USO under Abravanel is imo something special, that is the interpretation as a whole; I do find the pacing here to be perfection but otherwise I won't bother trying to put it into words. This is a towering and noble masterpiece and I'm certain that almost all visitors here have their personal favorites. I hope some of you find this account worthy of placing near the top. I still find this to be one of greatest Five Variants of "Dives and Lazarus" that I have ever heard as well. Stunning. 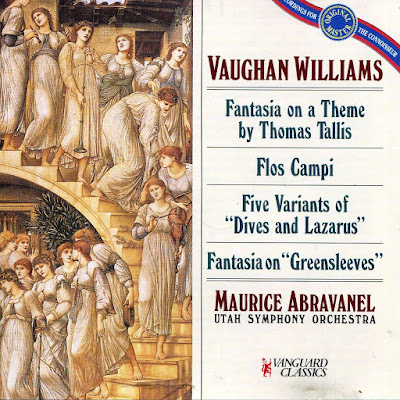 I am going to post both 320 and Lossless versions of this disc - Many Vaughan Williams freaks like myself wouldn't want anything less I'm sure. When I do post lossless, which is not often, I make m4a files, not the much larger wav files. I barely have time for dual uploads as it is : / 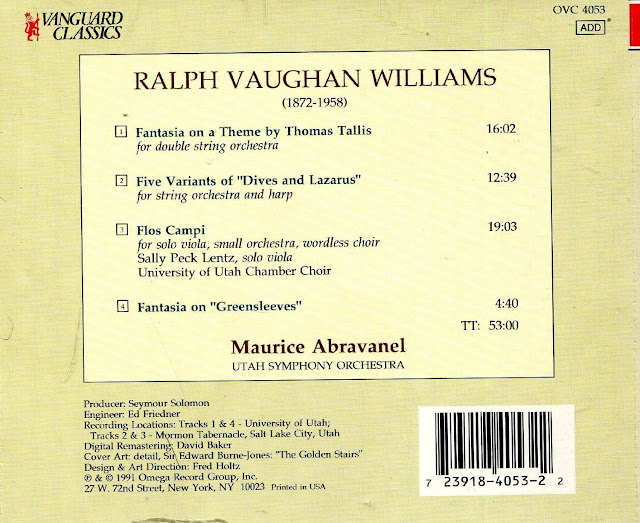 -Perhaps you will agree with me, or perhaps not. Either way.... don't miss this!
Posted by Tzadik at 8:25 PM 7 comments:

Greetings and good weekend to all. I haven't posted anything for about a week, and the last time I was on here there was a comment asking if I would repost the Arnold Rosner discs. Ironically, this recording (yes, I have already mentioned that it's one of my top five of all time) unlike some of the others is still available as an active download. That makes me happy as all of my downloads (zshare) expire after 30 days if there is no activity. Clearly visitors continue to feel a sense of intrigue. For me it is personally rewarding, a "mission accomplished" if you will as I feel that this gem is the perfect introduction to the compositional grandeur of the late American master Arnold Rosner. This is music that needs to be heard. Regular visitors around here will already know that Arnold was a dear friend of mine. Indeed it was this recording - a potent 'gateway drug' for my ears, mind, and spirit if you will - that blew me away, and after just a few hearings of "Responses, Hosanna, and Fugue" (my introduction Rosner) I was downright compelled to try to contact the composer. In short, it was a life changer.

The original post - babble and all, can be found here along with the original download encoded @ 256 kbps AAC:

The links provided at the bottom are for higher quality 320 AAC or highest quality Apple lossless files (also AAC). 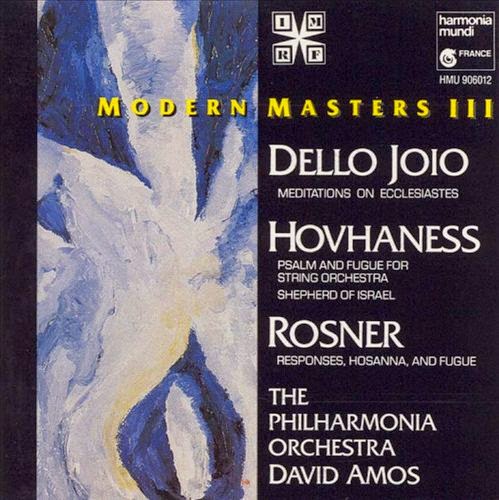 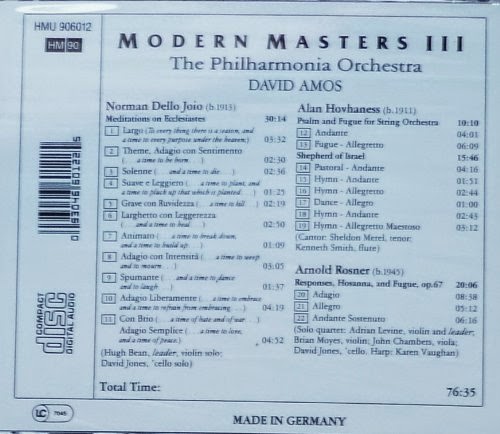 *I will re-up all of the other Rosner discs as well. At this time (which is 99% of the time) the bulk of the recordings are nestled in my car. And it's been 97 degrees all day - yep I am as lazy as the cheshire cat. (ermm I happen to keep my regrettable flab and grin constant however)

If you are "new" to my blog I hope you find your listening experience to be powerful, moving, and drenched in overwhelming beauty.

*For this (entire) recording I highly recommend the lossless files!!

This is a real treat from BR Klassik, and these are three important examples of 20th century music for voices that should be in your choral collection. And perhaps they are already. I have multiple versions of all three works here and these performances are very fine and highly competitive. I have too many versions of Kodály's masterful "Missa Brevis" to count - it's just so damn beautiful! 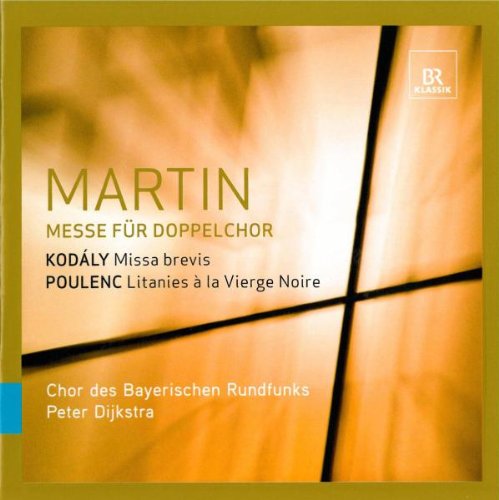 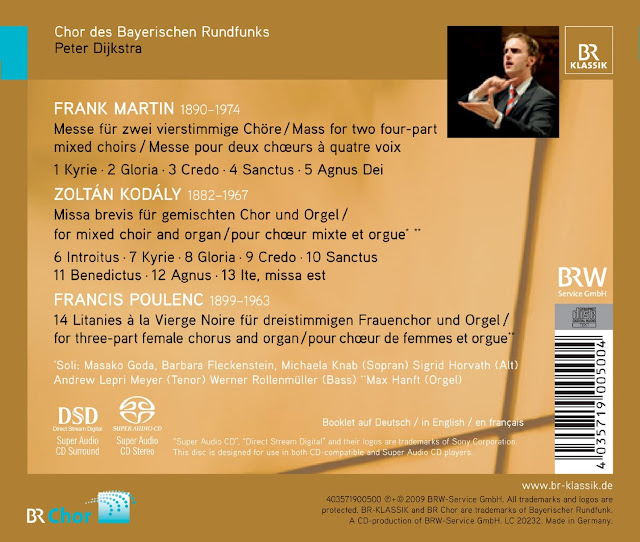 Sorry for keeping things brief (I know you all prefer my typographical babble to all of the exquisite sound) but exhaustion is one of the few constants these days. I will see what tomorrow brings, more posts perhaps - but do not hold your breath as there's a 50/50 that you'd be dead ;)

This is a great survey of Rued Langgaard's music in it's early stages right on up towards the end of the composer's life (Symphony No. 16 - imo one of his finest - was completed one year before his passing). The entire Langgaard series on Dacapo is sublime, essential I think, and near perfection sonically and in reference to the performances throughout. 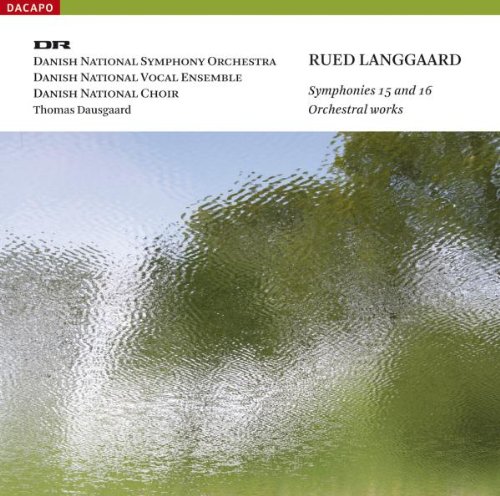 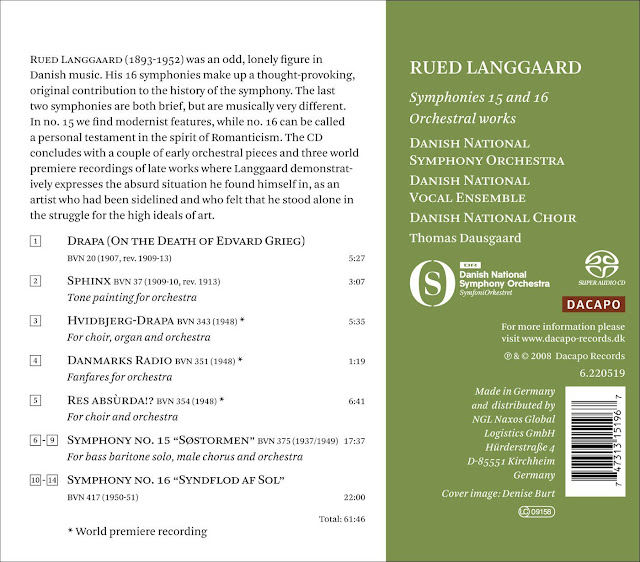 http://www114.zippyshare.com/v/aaBRDtj1/file.html
Posted by Tzadik at 7:35 PM No comments:

Greetings everyone. Things are, at this time, still quite busy so I am posting a few things quickly to (hopefully) sweeten your weekend and break the 5 days of silence around here. Again I am going through boxes of discs I have at my parent's house, and the trio of recordings I plan to add now I have been listening to whilst sifting through mountains of music. I don't have the time to write about the music :(    Those of you who admire Howells (and how could one not??) will find much enjoyment here; this is a great recording of the magnificent "Hymnus paradisi" as well as "Sir Patrick Spens" in it's world premiere. I will say that I am surprised that this is the 1st time I am posting Howells! He is best remembered for his music for voices, however his orchestral works too are superb - I likely won't be posting them however as I believe several other bloggers have already shared the best of those discs in the past. 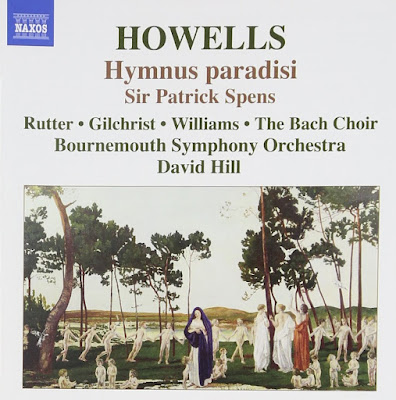 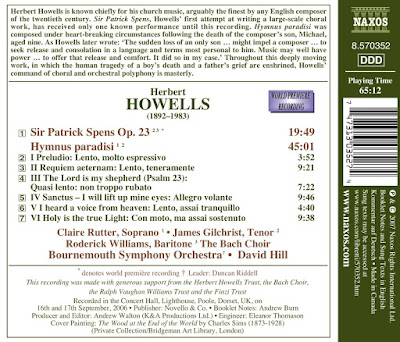 A moment without music - for the victims of the attacks in Nice, France 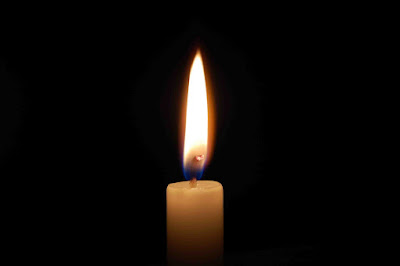 I meant to post a 3rd recording of Hovhaness's Magnificat setting on Crystal Records after my last Hovhaness post of the Magnificat on Delos Records. Also included on the Crystal disc is a recording of the wonderful "Saturn" for Clarinet, Soprano and Piano. Hopefully I will be able to locate is soon.
Here we get two choral/orchestral works, the large-scale "Lady Of Light" (conducted by Hovhaness) which is 43 minutes in duration as well as "Avak, The Healer" which is half the length. Both pieces are full of gorgeous music but I prefer "Avak The Healer", which is sung here by the great soprano Marni Nixon. I think that this is the first time that this recording has been shared on a blog, or anywhere else. 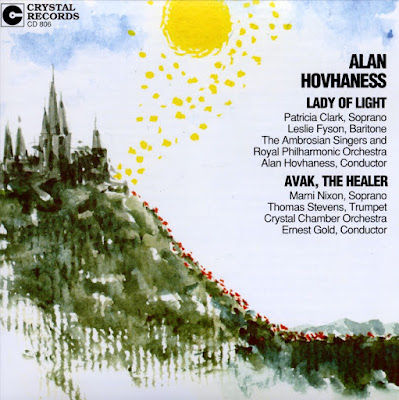 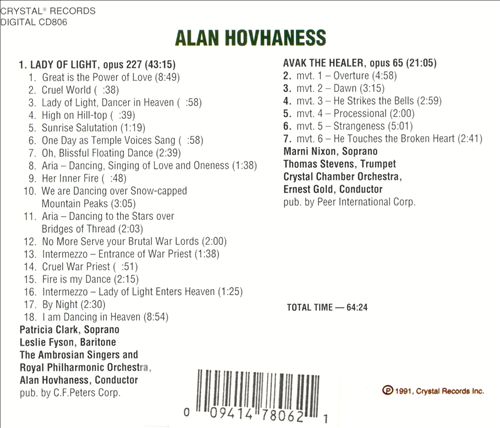 This is what Hovhaness had to say about this program:

"I composed words and music of Lady of Light in 1968. The story was influenced by the "Chalabala" legend, a kind of Swiss version of the "Pied Piper of Hamlin". I composed the music in Grand Opera style. It was my protest against war. The two outside pieces, numbers 1 and 18, are like two luminous pillars representing Nirvana or that which is beyond earthly existence. Each pillar is in the same three-part form - aria, choral fugue, aria. Between the two pillars hangs the dark tale of the dance of love and love's martyrdom.

The Overture to Avak, the Healer was composed in 1945. I conducted it on March 10, 1946, in an all-Hovhaness program in Boston. The program notes describing the Overture called it a three-part form like the Japanese Jo-ha-kyu form. The three sections, or steps, may be called "the sorrow", "the mysterious way" and "the blessing". The greater the emotional intensity, the greater the simplicity. This is not "intellectual" music but pieces of pure feeling. The trumpet symbolizes the voice of the inspired messenger, the cantor, the singer-prophet. The strings express the prayer of the people. The text and cantata were composed in 1946 and performed in New York on February 7, 1947. These are four songs of spiritual healing with a processional-like intermezzo."

-If anyone wants all of the texts to these works let me know; it will take quite a while to type out so I won't be doing that now!

If I have the time to post more later I will; as always I cannot promise!

Hello everyone. Life has been busy and full of enough sh!t to keep me practically unable to be online whatsoever. Here and there when possible I have been going through a lot of discs that I have stored still at my parents house, as they are considering moving. I am trying to decide whether or not to bring them to my apt. (pretty lousy option, I have a few thousand discs there) or if I should simply convert them via iTunes over the summer and then possibly sell this portion of my collection. A "1st-world problem"  if ever there was one. This is one such disc that I randomly encoded to Apple lossless and zshared to myself; I should have brought a flash drive but oh well. I recall this being a fine recording of both Adam's pseudo-choral symphony "Harmonium" and Rachmaninov's "The Bells". I prefer to hear the Rachmaninov sung in Russian as I think it has much more impact but it is beautiful all the same.

Again I've encoded the music as Apple lossless thus there are two uploads. Lossless m4a is still significantly smaller than flac files, but should you want lossy there are many apps that will convert easily. 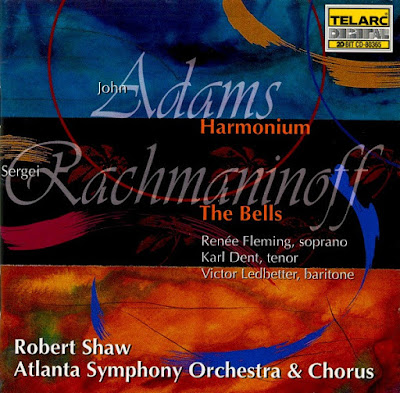 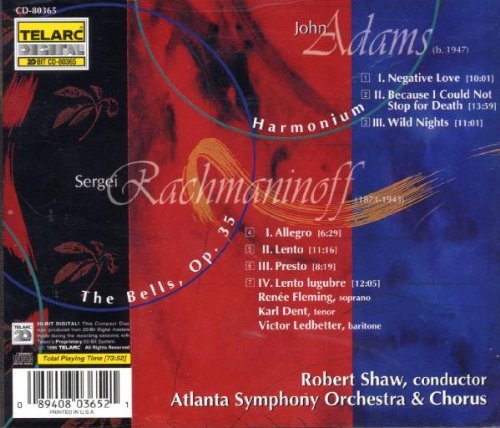