This Dutton Epoch disc of two British Cello Concertos is an absolute knockout. I bought it for the John Foulds concerto (I have always been quite fond of Foulds's exciting, often exotic and exotically inspired orchestral music; not unlike Holst Foulds was interested in the musics of other cultures and lands, India especially was one such inspiration) which is an excellent early work, however I actually enjoy even more Lionel Sainbury's Cello Concerto from 1999 (which is a world premiere). It really impressed me, and it makes me eager to hear more of his music (I think I have one other Sainsbury work, but don't know what off-hand).

Sainsbury's concerto begins with a brief somber melody from the cello and orchestra that quickly turns to a fast and rhythmically exciting melody that is developed by soloist and orchestra to a dramatic climax. A brief reflective melody gives way to the return of the vibrant opening subject and carries the first movement to a conclusion, returning to the reflective melody as the concerto continues to the second movement without pause. The movement is marked Adagio with a lament by the cello leading to a song-like melody for the woodwinds that the cello picks up. The somber tone of the music continues in a march-like melody played by the orchestra, answered by the cello with a brooding theme, which is extensively developed and closes the movement. The finale begins with an energetic melody played by the full orchestra. The soloist enters after a long exploration of the theme with a dance-like melody that is developed between cello and the orchestra. The somber theme from the prior movement reappears, elaborated upon by the soloist, leading into a cadenza. The main themes of the movement are recapitulated and the concerto comes to a good-humored conclusion 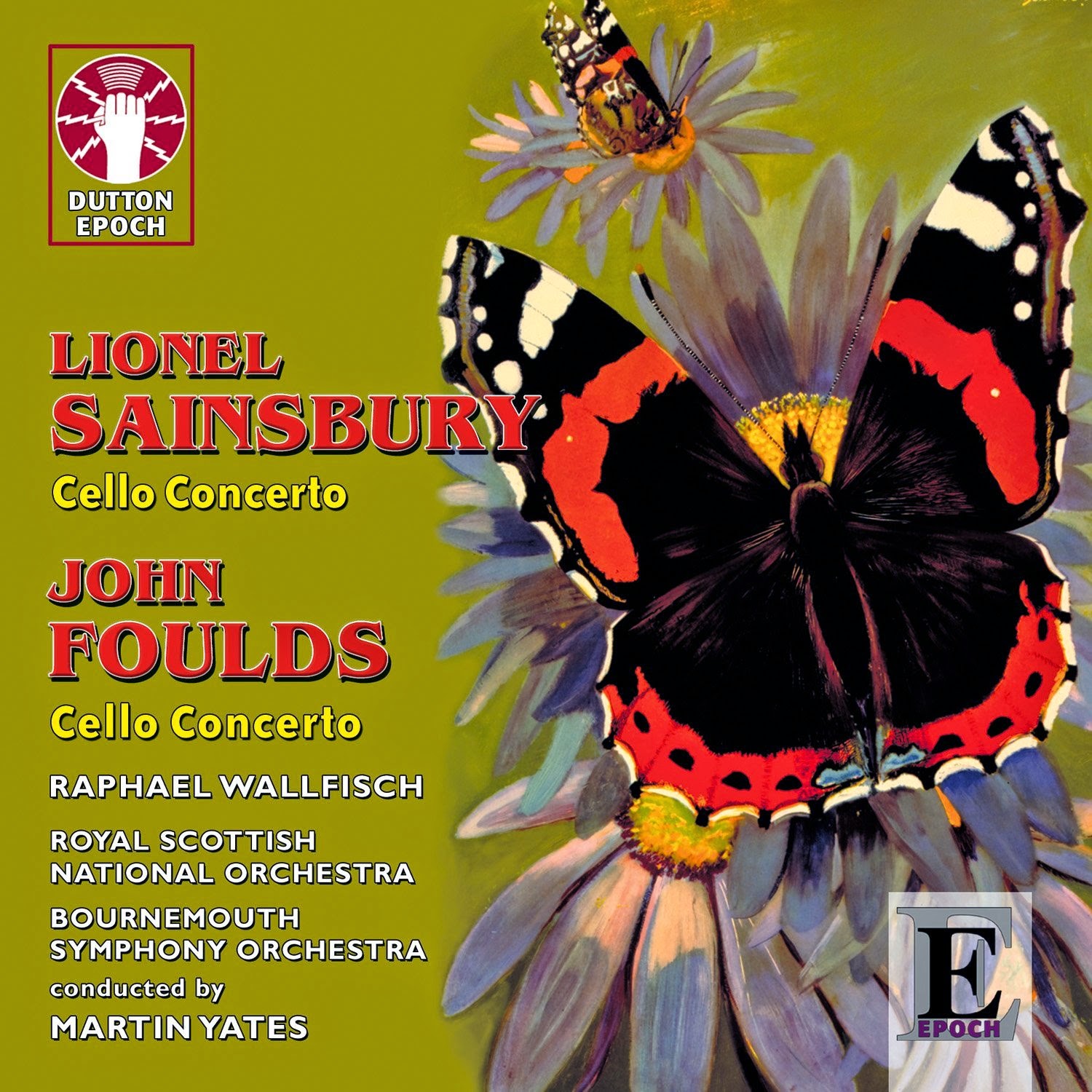 This is what is said about the disc on Dutton's own site:

The Foulds concerto at last! This is a beautiful, romantic programme. In his booklet notes, Malcolm MacDonald describes Foulds Cello Concerto as “a youthful essay in a melodious late-Romantic idiom ... a succession of memorable tunes in superb orchestration.” He goes on to find the coupling – the Cello Concerto by Lionel Sainsbury – as “unabashedly tonal and opulent melodic language, recalling the neo-romantic idiom of great 20th century composers such as William Walton and Samuel Barber.” Long requested by Foulds enthusiasts after Raphael Wallfisch had revived it in a broadcast over twenty years ago, Dutton Epoch is delighted to make it available following the success of their two-volume survey of Foulds’ shorter orchestral works. Raphael Wallfisch is now joined by Martin Yates and the Bournemouth Symphony Orchestra to make this world premiere recording. For Lionel Sainsbury’s equally delightful Concerto, the Dutton Epoch team journeyed to Glasgow where the Royal Scottish National Orchestra relished Sainsbury’s memorable invention, recorded in the presence of the composer. 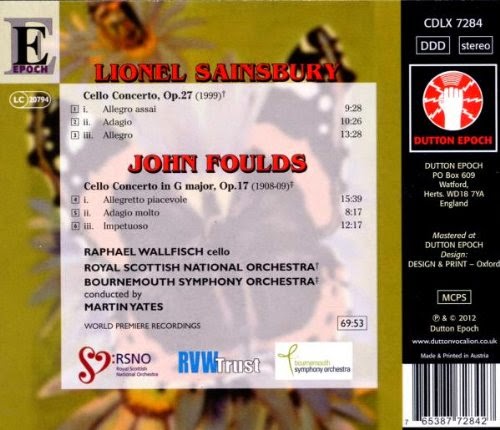 The cello was Foulds’s own instrument and, although he apparently composed two other concertante works for the cello (one discarded and lost, the other an arrangement of Corelli), this full-scale 1908–09 work is a typical product of his early phase when he had not yet crystallized a personal idiom. Written in a quasi-Elgarian manner, the 35-minute piece is full of lovely ideas. The orchestral writing is rich and strong, and the solo part (after a curious initial plucking or strumming entry) is consistently lyrical. Enjoy!

Beauriful!! Do you have more Foulds?

Hi Franz I do have quite a bit of Foulds, I will post more soon, some I have here with me and some unfortunately is still in stotage as I don't have room for my whole collection at my apt. Regards

Hola Tapirman happy you like it :) -I'm still looking for the Harrison & Cowell symphonies btw...

AAC Audio quality is great. What audio converter do you use?

Hi Expanium, I just use iTunes, it works very well. I don't like iTunes as a music library however, I find it annoying. But as far as encoding I'm very happy with it. Regards

Thanks! I was away for a week, so did not download anything or make any comments. But I will, as soon as I get some free time. :)))

Hey Piterets, nice to hear from you, hope your week away was more pleasure than "work". Anyhow, yes do give a listen when you can and write back; I always like you feedback my friend. -Tz

Expanium, so did you test out iTunes then?